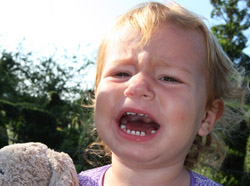 When my daughter, who is now 5, was in this phase, I was sure this meant that she was just a control freak who would fight us every step of the way for the rest of her life.  (A little reactionary, I’ll admit, but this is truly what I thought in the midst of those epic tantrums.)

Now I’ve come to see resistance in a different light, that’s pretty much summed up by this quote:

“Your resistance is a sign that your system is reconfiguring itself toward success.”
-Todd Herman, ThePeakAthlete.com

For my kids, that means that those months or years of saying no to everything little thing and collapsing in a pile of tears is actually the very thing that gets them from the stage when they did everything like docile little creatures simply because they really had no choice to the point where they can say, “OK, Mommy, I’m ready.” As upsetting as the screams were, they were a sign that everything was progressing exactly as it should to make them more autonomous – and therefore less freak-out-able – beings

The good news is, this happens with adults too. Lately, I went through a major period of resistance in the days after I first announced the Chill Tour. See, my whole life, I’ve been convinced that plans don’t work. Something always comes along to change them, my thinking went, and so any prep you do beforehand will be wasted time. Which resulted in me playing things by ear, a lot. To the point that a lot of the good ideas I had never got a chance to get off the ground because if something miraculous didn’t come along to make them magically come to fruition on their own, I didn’t put any effort into making them real.

This time, though, I had a vision of going out on the road and being in the same room with my people. It came to me while I was doing yoga in my closet, and I trust the insights that bubble up when I’m in that quiet space. Normally, my planning-averse self would want to send out a few feelers, get some dates booked, and THEN announce. But I wanted to put that old belief to bed. So I announced that I would be going out on tour before I had anything set in stone. I told the universe my plans. (And they are slowly coming true – just added another date and city to the tour as you’ll read below.)

I sent the email out and felt high. It is so empowering to give yourself a new experience!

And then I totally freaked out. The next morning, I thought my husband looked at me with a wrinkle in his forehead when I told him what I’d done (he didn’t, in reality). And it seemed like the second car we were about to acquire – which would make the regional parts of my tour possible – had slipped through our fingers. I was devastated. It seemed like the universe was telling me to take my plans and kiss them goodbye. I went in to a tailspin, insomnia, anxiety dreams, indigestion, you name it.

Then I read the quote above (and had a great call with my coach) and remembered, this is just part of the process. I didn’t do anything wrong, and I don’t have to do anything to make it go away. I just have to accept it and trust that it’s getting me exactly where I need to be, because it’s a symptom of an old belief curling in on itself and evaporating – kind of like the Wicked Witch when you throw water on her.

As soon as I stopped resisting my resistance, it started to shift. And things look mighty different now. I still have to do the work of reaching out to studios and event spaces and fine-tuning the dates, but it doesn’t feel crazy any more. Whoo-weee.

So if you’re spinning out in your mind about something right now, wishing you could do something, anything to make the discomfort go away, try this instead: