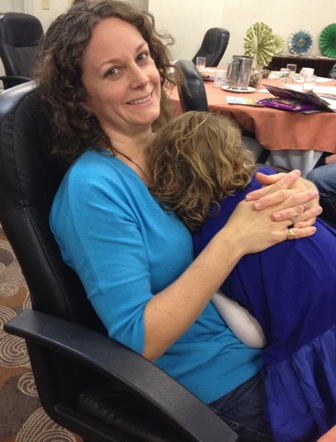 I spent pretty much all of Mother’s Day in O’Hare airport. Well, 7 hours of it, anyway. Which gave me plenty of time to think about what it feels like when the universe’s timing doesn’t match up with your own desired pacing.

But first, let me back up a bit: My daughter Lil and I had traveled to Lake Geneva, Wisconsin to be a guest teacher at the all-out fantastic Camp Makearoo – a retreat for folks who want to make more space for creativity in their lives. I was thrilled to have an opportunity to take Lil along to this family-friendly affair: Our retreat host, Toni McClellan, brought two of her boys and keynote speaker Meagan Francis brought her four-year-old daughter, Clara. It was a dream to blend work, family, and fun. The above is a picture of me, talking the Campers through a visualization while Lil cozied up in my lap. Bliss.

Lil was pretty excited about it too. This is a shot of her in the airport on our way. 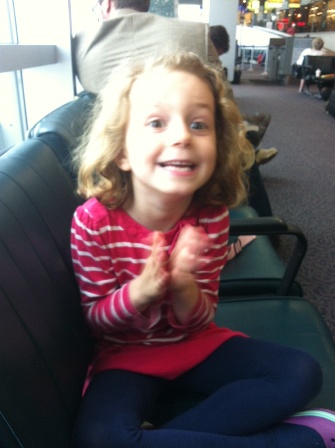 And now back to the airport: For our return flight, we got to the airport in plenty of time for our 1:44 flight. We returned the rental car, rode the shuttle bus, got through security, and then I saw it: an outpost of a Rick Bayless restaurant. Rick Bayless is a chef who specializes in authentic Mexican food. I have his cookbooks, cheered him as he won Top Chef Masters, and fantasized about eating in one of his restaurants for years. Years! On multiple prior trips to Chicago, I had tried to get in, only to be forced to gaze longingly at the overflowing dining room or hear on the phone that there were no reservations available.

When I saw that airport version, I had to get lunch there. The line was long. Lil didn’t want anything on the menu. I persevered and got my food to go so we could go find her some kid-approved fare. Twenty minutes later, we had a cheese pizza in hand and although we were just two doors down from our gate, I opted to sit in the dining area, at a real table, and eat my guacamole and poblano corn chowder like a real human being. I knew it was getting late. I didn’t care. We still had 25 minutes.

When we had finished our lunch and rolled up to the gate, it was empty. There was only one lone airport employee with his headphones on. “Flight’s closed, ma’am.” But we still had 25 minutes, I pointed out. Then he pointed to the display screen. The flight didn’t leave at 1:44, it left at 1:30 and it was 1:20. “Flights close 10 minutes before take off.” He re-booked us on the next flight, which was at 7:30 that night. Six more airport hours, and our iPad battery was already down to 13%. It was Mother’s Day.

So who here has had an experience where things felt like they were happening too quickly. Or too slowly? Or just all out of sequence and what-the-heck-is-going-on-here anyway?!?

Here’s what my experience in the airport reminded me of for just these very types of moments. These are the best ways I know to learn and grow from those times:

Give your emotions an outlet. A lot of times when things aren’t going our way, there’s an instinct to just take a deep breath (or scream “Serenity now!!”) and hope to go immediately to acceptance. Which is nice if it works for you, but in my book, it’s better to let disappointment or frustration show.

At the gate, after the agent told me that although, yes, the plane was still there, the door was shut and we couldn’t get on, I burst into tears. I knew cognitively that we were safe, we’d sleep in our beds that night. But still. I’d messed up when I had my daughter with me. For a few minutes, I felt awful. And those tears – even though part of me didn’t want my daughter to see them, because I didn’t want to make her upset – came up all on their own and needed to come out. Five minutes later, I had mental room to embrace the knowledge that we were all right. I was ready to admit we had a pain in the butt, not a problem.

Find some way to let whatever emotion’s coming up the space to be heard. As the inimitable coach Darla LeDoux says, “Facing the feelings allows them to be transformed.”  You don’t want to hang out here, but if you truly let yourself feel how you feel, the unpleasant emotion will move along WAY, WAY faster than if you try to ignore it. Truth.

Ask yourself this one question. If things aren’t happening as quickly as you’d like, chances are there’s still something else you’ve got to learn so you can grow in to the person you need to be in the next, bigger phase of your life. So, ask yourself, What do I need to learn in this moment that will prepare me for what’s to come?

For me, in that airport, I saw that I need to get more mindful of time. My clients will tell you, I often let the calls go over their designated time. Sometimes that’s exactly what the moment requires, and if I don’t have anything scheduled right after, I’m happy to keep working things out. But, if I want to serve a lot more clients, I’ve got to get more skilled at providing great service in smaller amounts of time.

Look for the win-win. There is always, always an upside to every crappy situation. I’m not talking about blithely going through life as a Pollyanna Happypants, or training yourself to be an optimist. On a fundamental level, if you believe in a benevolent universe – which I do – we are all always getting exactly what we need, all the time. And the proof is there if you look for it. Take any potentially sucky situation and look for the benefits. It takes an open heart and mind, but they’re there.

For us, on Mother’s Day, Lil and I got to spend time together in a little bubble – no friends, brothers, emails, or anything else to distract us. We both got a great story, one that very well may grow in to family lore. She got to display her mettle as a traveler—going with the flow, carrying her backpack, practicing her entrance and exit on to escalators and moving staircases. We got lots of time to chew gum (which so far I only allow when we’re on airplane trips) and practice blowing bubbles. We discovered a cool playspace in Terminal 2 where Lil had a funny experience with two sweet, rambunctious boys. My mom got to come to our rescue and pick us up at the airport at 10:30 at night, and got an enormous running hug from Lil that I know made her Mother’s Day.

Looking for the win-win raises your energy level – it gets you out of feeling like the victim of fate and helps you focus on what’s going right. And you know what I’m about to say, don’t you? Yes. What we focus on grows.

Got something that’s not happening as quickly as you like and it’s giving you fits? Let’s schedule a free sample coaching call and see what there is to see.