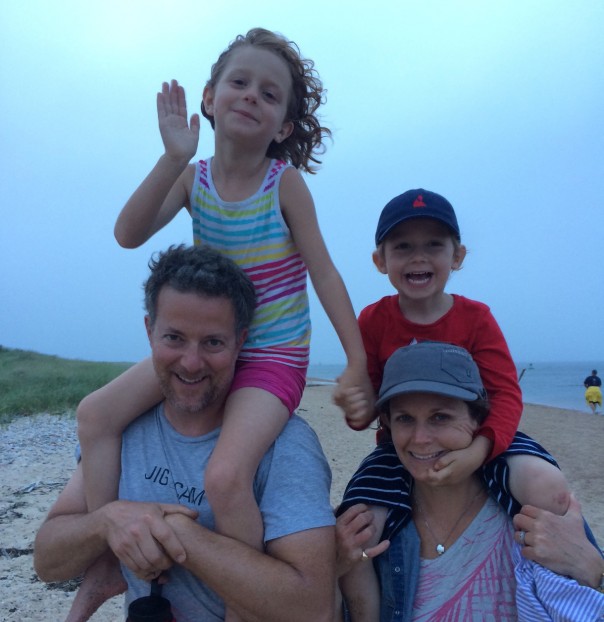 Greetings after a week off! Last week my family and I made our annual pilgrimage to Block Island. A tiny speck of land 13 miles off the coast of Rhode Island, that island is my happy place. In addition to being beautiful (imagine a mini Ireland) and smelling divine (think honeysuckle and salt air), going there feels like traveling back in time 50 years. Cell and wifi reception are iffy at best. The big highlight of the day is going to get ice cream or sitting on the lawn overlooking the Atlantic with a tasty beverage while the kids roll down the hill. Heaven.

One of our annual activities is kayaking. This year, I had my four-year-old, Teddy, in my boat. He was wearing his brand new Block Island hat and we were having a great time exploring the Great Salt Pond.

The only hitch was that it was pretty windy.

So windy, in fact, that when we were headed back across the pond to have our picnic lunch, Teddy and I got separated from my husband and daughter. They had headed straight to the beach where we’d dine; Teddy and I got blown upwind to the point that we couldn’t see them or the beach any more. That’s when the wind picked up Teddy’s new hat and blew it in to the water about 50 feet from us.

I was already struggling to turn the boat back to face the direction I wanted to go. I tried paddling backward on the left and forward on the right, and all we did was stay in one place. Then when his hat blew off, Teddy started crying. Loudly. Which still triggers my nervous system and makes me feel like I’m about to sweat blood.

“Don’t give up, Teddy, we’ll get your hat back!” I screamed into the wind as I paddled like crazy, trying to get our nose around to face into the wind instead of our butt (or is that the bow? I’m rusty on my nautical terms).

“You’ve got to believe, like Tinkerbell in Peter Pan! We’re gonna get it!” I was huffing and puffing by this point. What was probably only 60 seconds felt like 10 minutes of maximum exertion. At one point I considered getting out of the boat and actually swung a leg over the side, thinking I could walk the kayak over to the hat more easily than paddle, since the pond was pretty shallow. And then I had visions of Teddy in the boat by himself, blown away from me. Cue total panic.

I stayed put and engaged in more furious paddling.

I gotta admit. For a second, that really hurt. Teddy had lost the faith.

I kept thrashing the paddle from side to side, getting nowhere, until I stopped to regroup. And then I discovered something: I could row the boat backwards. So long as I wasn’t trying to turn into the wind, we could move along just fine. And away we went, butt first.

Let me tell you, I had to dig that paddle in deep to make headway against the wind (is anyone else hearing a Bob Seger song in their mind right now?). But before too long, I had maneuvered us over to Teddy’s hat. He leaned over and plucked it out of the water, smiling the biggest smile. And I kept paddling, backwards, until we reached our picnic beach.

I know you’ve had a moment where the people you thought you could rely on for support had their doubts.

Sometimes you are the only one who believes what you want is possible. This article is for those times. Remember, you always have the option to regroup. To do things differently. To dig deep and go for it. It may look like the “wrong” way. But you know what? You can still get there. One stroke at a time, you’ll get there.

And if the person whose faith is wavering is you, hear this: You can borrow mine. Because I know 100% that if you have a vision of what you want, it’s possible for you to get there.