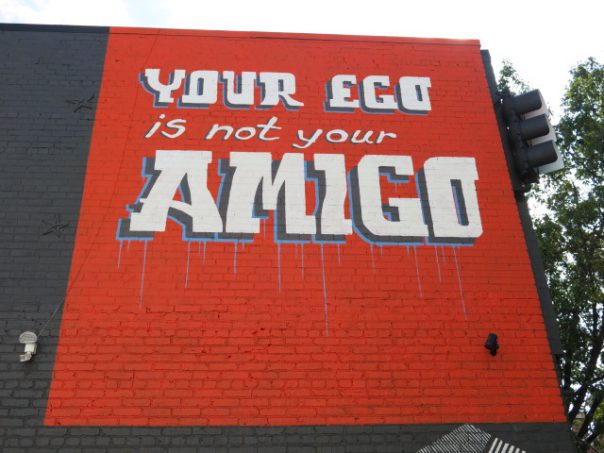 Regardless of where you fall on the political spectrum (or if you’ve fallen off it completely and wish everyone’s Facebook feeds would go back to funny memes and kid pictures), it’s time to admit something. Something that’s vital to your future happiness and freedom.You have an a**hole in chief that is attempting to rule your life. I’m not talking about Donald Trump, I swear! I’m talking about your ego.

This ineradicable part of your mind is the tiny tyrant yelling in your ear. It wraps itself around the jewel that is your inner wisdom until it gets crusty and brittle, like the rock that forms around a geode. (I got this analogy from the awesome book on ego and resistance by Cheri Huber called I Don’t Want To, I Don’t Feel Like It.)

The ego believes that it is the only reason that you are alive and well today. It considers itself to be your survival system. So anytime anything calls to that gorgeous, loving, trusting, and knowing jewel of your inner voice, the ego perks up like a dog that’s just seen a squirrel. Alert! Alert!

Then it goes to work, using everything in its tool box to distract you, scare you, and make you feel crappy about yourself so that you don’t pursue whatever that exciting thing is.

Here are some of the tools your ego uses (any resemblance to what we’ve seen out of newest president are purely coincidental):

The ego LOVES to confuse you, because if you’re confused you’ll do nothing. Meaning, you won’t change the status quo and you won’t open yourself to possible failure—or success.

The ego will say, “I can’t take that job because the commute is an hour and a half and half my paycheck will go to taxes.” When in reality, it takes 55 minutes door to door and your tax rate is 28%. The actual facts may still not work for you, but you want to make a decision based on truth and not on scare tactics. Always seek the truth, it is the only path to freedom and fulfillment.

Oh, the ego loves to feel indignant and righteous! Here’s the problem with that – it keeps you invested in being right, which means other people have to be wrong. This perpetuates disconnection, which is isolating. And it sets up an illusion that if other people have more than you, it means you must have less. I say illusion because the truth is, life is not a pie. There is always more available to everyone—more money, more happiness, more freedom, more success.

The temper tantrum is also a distraction—it turns your attention away from what’s calling to you. Very sneaky. Have your pity party or your moment of anger and then get back to whatever it was that was lighting you up. You don’t have to fall for it.

Anytime you find yourself looking at someone else and feeling inferior in any way, it’s your ego talking. It’s not the truth. Repeat, it’s not the truth! I know it can be helpful to look to people for inspiration, but that’s only useful when hearing or seeing what someone else is doing empowers and emboldens you to go for something you want. If it makes you feel bad about yourself, remind yourself, “This is just my ego talking. I don’t have to take the bait.”

This is another distraction, one that really pulls on the heartstrings. Pining for what was negates anything good that’s currently happening and puts your focus on what’s wrong—and what we focus on grows. You want to be grateful for what was, accepting of what is, and excited about what’s to come.

If you’re getting stuck in wishing things still were how they used to be, I’m guessing you’ve got some grieving to do—some legitimate sadness that needs to be seen, felt, and ultimately released. Because longing for the past keeps you closed off to the present moment, which is where all good things exist, and what creates all the moments that come after.

As loud and as seemingly powerful as the ego may be appear to be, it’s not truly the boss of you. That role belongs to your jewel of a heart.

It takes practice and skill to stop biting the hooks that the ego dangles in front of your face day in and day out. But it can be done. (And when you do inevitably grasp on to something the ego throws at you, you can get better at realizing that’s what’s happened and redirecting your attention.)

It can be as simple as realizing what’s happening and choosing to do something loving instead—taking a breath, stepping outside, petting your dog. You may not be able to get rid of the ego, but you can choose to live from the heart.