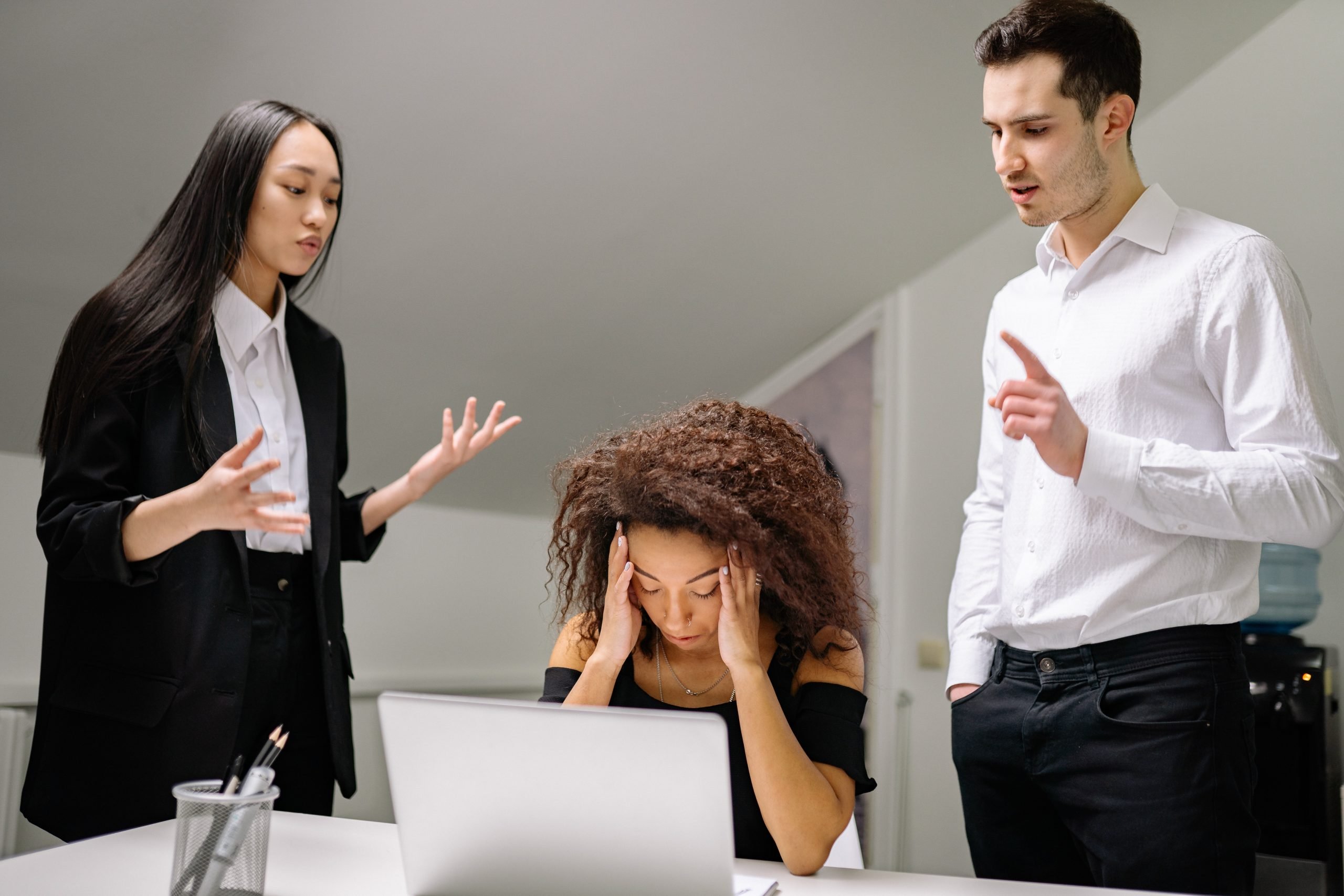 Welcome to the final week of 2021. Can you even believe it? We are about to turn the calendar page to a new year. And that means it’s go-time here on How to Be a Better Person.

Back in December 2016–this was right after the election, when our country felt so divided and things felt very uncertain–there was a poll released by Marist University that said, for the first time ever, ‘be a better person’ was the most popular New Year’s resolution.

I felt such hope when I read that. Because it meant, to me, that people were realizing that we can’t get sucked up into our own little petty dramas if we want our lives and our world to be hopeful. We’ve got to pull up our socks, and give a shit, and be the change that we wish to see in the world. (How bout that–three cliches in one sentence!!) And I wanted to be part of that, and help folks who were feeling that desire figure out ways to actually do it. I had recently published a book called Stress Less, and talked to my editor on that book about this new poll, and How to Be a Better Person, the book, was born.

I launched this podcast in 2019 as a way to keep the conversation going. So in some ways, this new year’s season is my anniversary, as well as a natural time to think about how to be a better person.

In honor of the year we just had, and how grueling it has been in terms of stress and uncertainty and the sheer volume of decisions we’ve had to make on a daily basis,

I want to approach this new year’s season a little differently.

Instead of reflecting, and setting goals–both of which are great to do and if you love doing ‘em, good for you do NOT let me stop you–I am dedicating this week’s episodes to the theme Un-Do 2022: 5 Surprising Strategies for a Better Year.

I just think we’ve all had enough of “I’ve just gotta do this” or “Let’s do this” thinking. Given where we are at this point int time, let’s NOT do. Or rather, let’s un-do, and make way for a more nuanced and personal path to emerge.

Something else that’s different about this week is that I’ve got a co-host:

My good friend Terri Trespicio, author of the brand new book Unfollow Your Passion and my go-to source for advice that flies in the face of conventional wisdom. Terri’s TED talk called Unfollow Your Passion has over seven million views. Each day this week, Terri’s going to come on to talk with us about one idea from her amazing book that I’ve curated into five anti-resolutions, if you will. Choose one or choose ‘em all as a focus for the year ahead.

We’re going to start by talking about why it’s so important to spend some time thinking about the things you want to Unsubscribe to, in your life, your work, your thinking–wherever.

Okay. Okay. Actually, Terri, I feel like we should tell people just how long we’ve known each other. We were just talking about this

I know it’s really crazy. And every time I talk to you, which I’ve gotten to do for a little bit before we hit the record button, I’m just like having just these like pow, pow, pow moments in my mind. So thanks for coming on and talking to us today.

So you devote a whole section of your book to this idea of unsubscribing. What do you mean by that?

What I mean by unsubscribe is that we not only are oversubscribed–I mean, look at your inbox. We’re all oversubscribed. But my bigger concern is not all of your Crate and Barrel emails. It’s the fact that we are subscribed to ideas. And we forgot how we opted into them. Ideas about how we should live our life, that we didn’t choose. We just were told that’s how it is.

Whether that means you should be grow up and be a lawyer and be successful, or you should be married and have five children or, or you should never leave home. Or you should always have whatever you were raised with thinking or believing about what you should do be, or have as a woman, as a person of color, as a name, your type of person.

Right? And so the concern is not that, oh, I I’m, I’m subscribed to things I don’t want be. You might not even realize that you are. And so how do you know when you run up against this idea you’re subscribed to? There’s some idea you do battle with in your mind over and over. And you’re like, why is this so hard?

And the reason making some decisions in our lives are harder, is because we are trying to reconcile different things that we believe. So if I just, for instance, if I really wanted to move to Alaska , but in my mind, I’m subscribed to the idea that you’re not supposed to move far from your parents. There are virtues and morals laid into that.

And if I, part of me really wants to move to Alaska, I might think that doing so breaks some rules. My point is, what rules are we talking about, and are they true?

I mean, this is not a new idea. It’s just that the unsubscribing to me is a more manageable way of unseating those ideas. Cuz if I say, let go of your old virtues, what does that even mean? I let go of my virtue. What are you saying? Unsubscribing is very modern sort of language, right? You untick boxes so you can let some things go. And I think this is important, particularly at the beginning of a year, when we flip the page and we look at a whole new year and we say, what do we want this to be? What do we want from the next year?

And a lot of times we create a whole list of goals and we should do this and I should be that. And I have to run a marathon and I have to do all these things and make X amount of money. Okay. It’s great to have resolutions and goals, but how about a list that mirrors it that says, if I’m gonna do these things, then I’m gonna have to let these other ideas go. It might even be friends that you think are not compatible with the kinds of things you want. It might be certain relationships. Or it might be the central relationship in your life.

The things that you’re willing to let go of to make room for the things that you want. And I like the idea of unsubscribing because it puts us in control. It says, I don’t want to keep subscribing to this idea. I’m personally going to remove myself from this list.

I love it. And we are so used to ‘click here to unsubscribe.’ What if it’s just all that does is it lets us act on an intention. So you recommend listing the things that mirrors the list of things that you want to create, right? The list that you might have to give up.

Is there anything else practical that we can do?

Here’s a practical thing that you well practical, meaning it involves a physical action that you can do.

Exactly. Now if you’re like, oh, I’m gonna let the idea of that. Leaving home is a bad idea. Like that might be so deep that you don’t know you’re subscribed to it. And the, I, I do say this in the book and I say it everywhere else that one of the most powerful ways to pull up what you’re really thinking and look at it is to write it to the surface. You won’t just know, oh, I know why I struggle with this because I deal with this issue around my mother.

What if you took some time to write out here are the things I wanna do and then write out the reasons your stuck. As if you’re talking to yourself, I feel stuck and I don’t know why, , and keep going deeper.

Let it all all out on the page and then look at it and see if you can spot the places where you are stuck or where you might be saying, ‘I’m trying to hold onto two ideas at the same time that don’t go together.’ But this requires incredible bravery and incredible willingness to be honest with yourself. But I know of no better way than to write it out privately before you go talking to people about it, unless you’d rather talk to someone about it, but we have to get to the bone of what’s keeping us from the things we actually wanna do.

Love it. I like to say what’s been revealed, can be healed. Yes. Okay. Awesome. Yay. Unsubscribe check.

So your tiny assignment is to get out a piece of paper or open a blank document and write down the thing you say you want to do–and probably have been saying you want to do for some time now–but that you haven’t yet done. Maybe you futz around with it every now and again, but it remains this thing that part of you feels very strongly that you want, and part of you clearly isn’t on board with because you don’t ever actually do it. And ask yourself, why don’t I do this thing? Write down everything that comes up, do not hold back. Bring your bravery and your willingness, and trust that understanding what you are unknowingly subscribed to will help you click that unsubscribe button. Maybe not immediately, but over time, what you reveal CAN be healed.

Come back tomorrow the second surprising strategy for a better new year–un-plan your life.