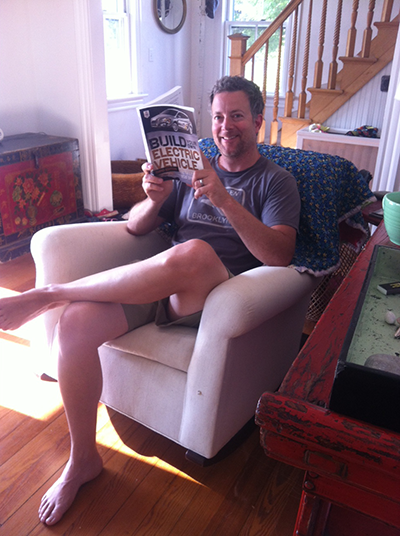 This is my husband, Scott. He is doing a little light vacation reading of a book called How to Build You Own Electric Vehicle.

See, Scott is obsessed with electric cars. Obsessed! He is an early adopter by nature.  Whether it was breakdancing in the early 80s or the first iPhone (remember those folks who stood in line for hours? Yep, he was one of them.) And whatever his current fascination is, he goes all in. He has no interest in hybrids.

For the past several months, Scott has been up late at night watching You Tube videos that chronicle people retrofitting their cars with electric motors. He has been reading reviews of the electric car models that are currently available. He has been scouring online forums for news of electric vehicles that are still in the production pipeline.

He was prompted to do all this research because his car, a 2005 Mazda 3 hatchback that we have owned for 8 years, was starting to show its age. I said that although I knew that it was getting rickety and a little run down, I’d really rather wait until next year when our son is out of preschool and we have more discretionary income. Could he just wait a few more months? He listened, even agreed. But still, he kept researching.

Part of that research was calling most of the car dealerships in Rhode Island and asking if they had any electric models on the lot. Only one did – Mercedes Benz – and we went and test drove it (it was pretty nice, but pretty expensive–$600+ monthly payments). But he got his name on waiting lists at all the other dealerships should the day ever come when an all-electric car showed up.

Then one day, he got a call from Honda. They had an electric version of the Fit, would he like to come test drive it? They said they were running a special – it was $250 a month to lease, plus they pay collision insurance and give the charging station for free. By the time you factor in the $100 on gas he won’t be spending, and the savings on insurance, it would cost just a little over $100/month–a pretty affordable dream, I’d say. 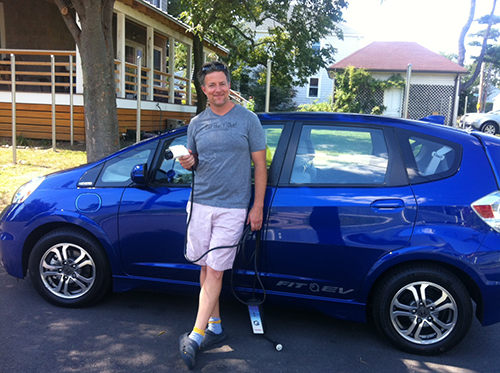 And this is Scott standing next to his Honda Fit EV. It’s like Christmas morning around here.

I’m sharing this little story because it shows perfectly how to get what you want:

Don’t take no for an answer. When one option didn’t pan out, he just got busy looking for other possibilities. Put a slightly different way, “Every no gets you closer to a yes.”

Put in the work. He read the books, watched the videos, called the people, showed up at the right times. If you ask Scott how he came to be the proud owner of a Honda Fit EV, he’d tell you he got lucky. I say he created that luck, because actions are what bring what you want to you. (Meaning, you can’t just sit around thinking about it.)

Keep the faith. This is about staying open to the idea that things are working out the way they are for a loving reason – even when those developments aren’t what you were hoping for. Scott was bummed when he found out the monthly costs for the Mercedes option, but he didn’t stay in that emotional space long. He just got back to his researching and calling and showing up.

Where do you get hung up in this process? Do you have plenty of faith but don’t actually do the work? Do you do plenty of work, but get derailed by a no? I’d love to hear about it in the comments section below!

4 thoughts on “This Is How You Get What You Want: A Parable”