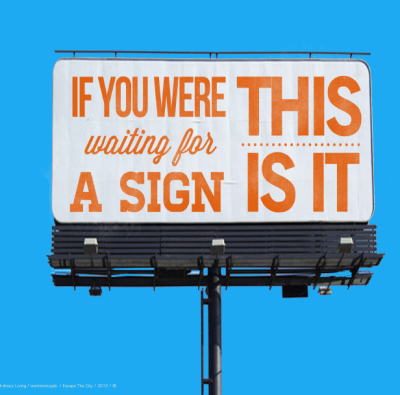 If you’ve been following me a while, you know that in addition to coaching I am also a writer. I covered wellness for national magazines for years (before the recession), and I have written a few books, including one coming out at Christmas time from National Geographic Books, called A Year of Daily Calm (whee!).

As a coach, a topic I cover a lot with folks is this idea of de-compartmentalizing, or finding ways to unite parts of your life that feel separate in your mind—whether that’s parenting and being a business owner, or finding ways to bring your artistic talents in to your day job.

(I wrote more about de-compartmentalizing here.)

There’s a saying in the coaching world—that we teach what we need to learn. Turns out, I had some more de-compartmentalizing to do.

Over the last few months, a good 50% of the people I’ve spoken to have confessed that they’ve always wanted to write a book. I say “confessed” because it feels like a secret they’ve been keeping, one that’s a little—or a lot—dangerous to reveal. Which, I get. It is scary to put your POV out there and put your name on it. It feels funny to think of yourself as an author. It can be downright uncomfortable to tell people about your ideas and position yourself as someone who is an expert on something. Writing is a mindset at least as much as it is a skill.

I noticed the coincidences of so many people sharing about the book they dreamed of writing. But I knew something real was going on when a former copywriting client tracked me down on LinkedIn and asked if I could coach her through writing her first book. (Six months later, the bound galley is due to arrive at my house on today for a final proof before printing – it is ON!)

Only then did it finally start dawning on me that I could put my peanut butter (coaching) together with my chocolate (writing), and start coaching people through writing their books. Eureka!!

It may seem ridiculously clear, but to me it felt like a major a-ha. Because that’s what’s so dangerous about compartmentalizing—you don’t even realize all the ways you’re doing it. And you can’t see what you won’t allow yourself to see.

That’s why sometimes life has to make things painfully obvious before we can put two and two together. But I’d just like to say, universe, I hear you. I’m on it.

I have been cooking up some very cool ways to support those of you reading this who have a point of view about something, and who are getting the feeling from your gut, or the universe, or your fortune cookies that it’s time to get it out into the world in a bigger way.

The first piece of which is a free teleclass I am leading next week:

Own It! Subtle Shifts to Help You “Put Yourself Out There”

I know that only a small percentage of you may actually have a book brewing inside you, and that’s OK. I promise, my next teleclass will have a wider appeal. But perhaps you have a friend, or co-worker, or husband who has shared their desire to write a book some day—pass this email along to them and encourage them to listen in!

Even if there isn’t a book on your list of dreams, this class will definitely be helpful if you are wanting to get your message out in any form, whether it’s a blog, videos, art, speaking, you name it. I am, after all, a mindset coach. And “owning it” is one of those squishier, mindset-y topics that pertains to A LOT of different areas of life and a lot of different people. So if the title of the teleclass is speaking to you, c’mon and join us! As ever, if you can’t make the live call, I’ll send out a recording for you to listen to on your own time, but you must be signed up to receive it.