Although I’ve lived in many cities, I’ve grown to love my current hometown of Providence, RI. When summer bursts out in June, we also burst in support of our thriving and dynamic LGBT community whose influence can be found throughout the city.

All year round in Providence we enjoy:

One of the cities I lived in (for 15 years) is NYC, and to my mind, Providence has the best of that metropolis plus the convenience and charm (and views of the sky) of a small town. Providence is perfectly situated too, just a train ride away from both Boston and New York.  And since Little Rhody is the smallest state, you can practically drive anywhere in just over an hour (lunch in Newport anyone?).

But what I love most about Providence is the diversity the city offers without soul-sucking judgment. in fact, it was one of the reasons we were drawn here. 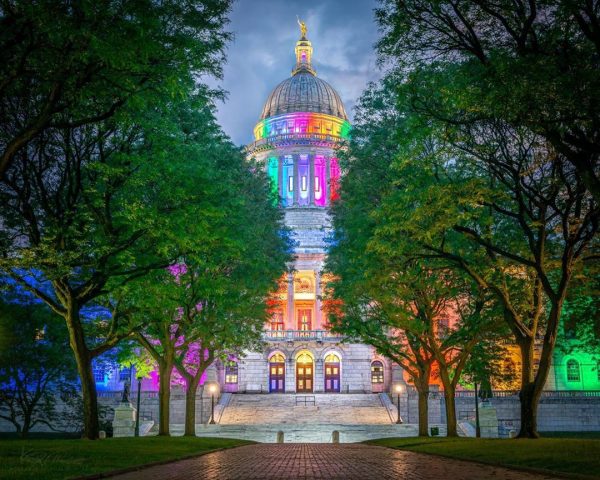 Providence Pride Month–Not a day, or a weekend, but a month

While many cities have Pride celebrations for one weekend, here It spans all month. Throughout June, the city hosts one of the best celebrations around that includes festivals and parades, drag brunches, and family-friendly drag storytimes. The activities attract visitors and locals from every background.

Sadly, this year was a bit different. (What isn’t?) The pandemic forced event cancellations, but it didn’t stop Pride.

Instead, organizers decided to take it in another direction and host a rally to raise awareness of trans people of color. In support of “Trans Black Lives Matter”, and starting at the State House, people marched along the same route they have been marching since its first parade in 1976. This year also touted a message of racial inequality, loud and proud, which we all would do well to learn more about.

Chloe Savage of Woonsocket spoke at the rally sharing her daily struggles of safety being a trans person of color, even being afraid to walk down the street at night, but was encouraged at the numbers of supporters that attended the rally. After the Supreme Court ruling protected her from being fired for her identity, Savage said “Honestly it helps me sleep better at night. It’s a weight lifted off my shoulders, and honestly, it’s about time.”

Virtual events were still held instead of extravagant parades this year, but the message is still clear, Providence will not tolerate inequality of any sort–we are loud and we are proud! Even the Statehouse got in on the act, as did the artists who immediately adorned the plywood businesses put up during the first round of Black Lives Matters protests. We may be small, and we are definitely quirky, but we are loud and proud of the things we care about.