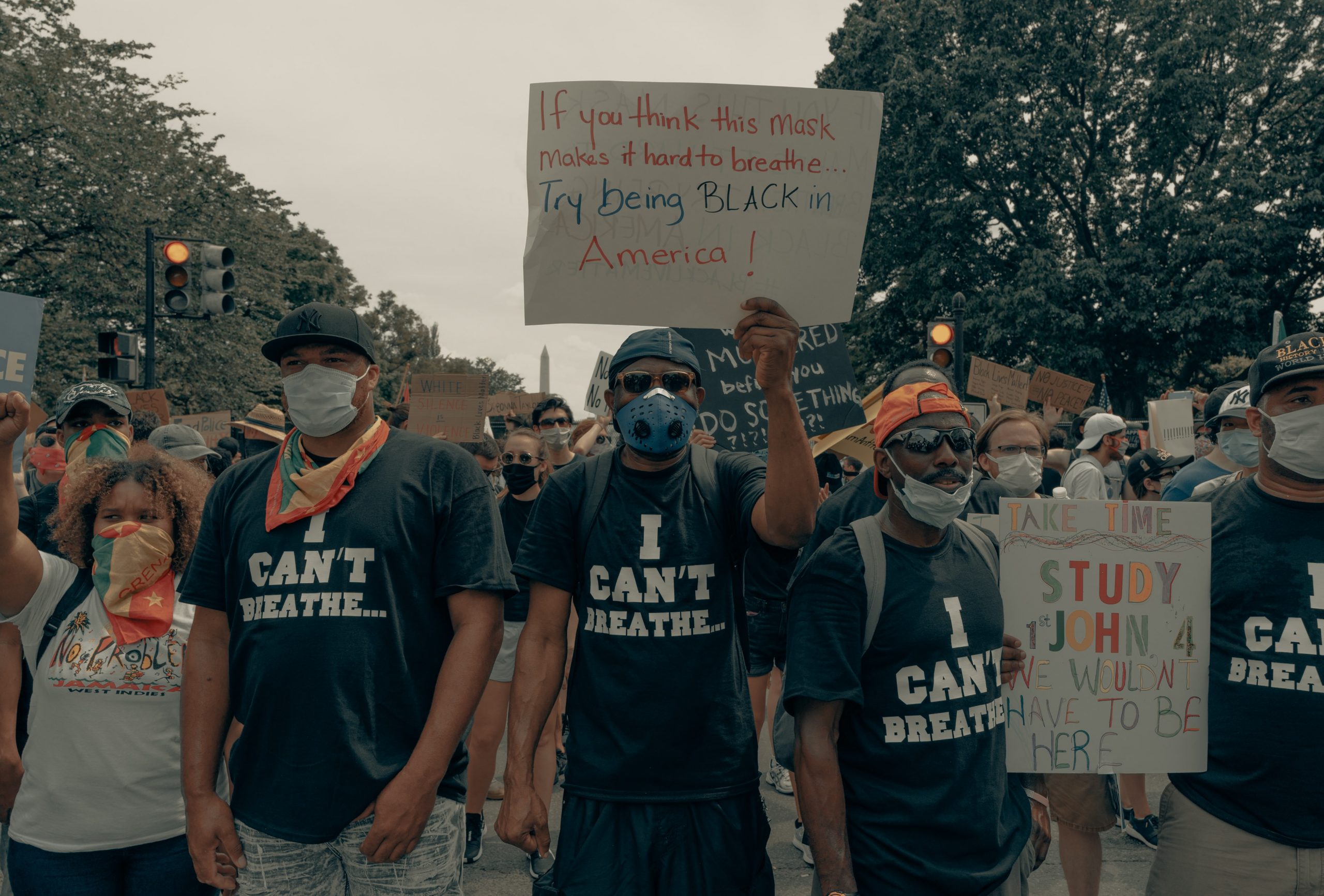 It’s very tempting to be offended by racism. So offended, in fact, that we make it about ourselves and then we take attention away from the antiracism work that needs to be done–both within ourselves and in society.

When I first recorded this interview in the summer of 2020, we were having a collective moment of taking offense to the senseless killings of black people by the police to the point that it became a source of outrage. For some of us, the outrage has died down and for others of us it is still hot to the touch.

Here’s why we want to stay in touch with being offended by racism, in a healthy way: They can be transformative, compelling us to take actions that we otherwise weren’t feeling inspired to take. Of course, they can also be destructive, and cause us to take aim at other people and setting things on fire. Both metaphorically and sometimes, literally. But when it comes to doing antiracist work, we need to be able to handle our sense of offense and outrage skillfully so that it fuels us to keep going, but doesn’t cause harm to us or anyone else.

That’s why I was so happy to see an email land in my inbox from Andrea J. Lee. Andrea is a master coach who specializes in helping people do things that might feel impossible. And certainly, dismantling racism can feel that way at times.

Andrea’s newsletter was about distinguishing between personal offense and moral offense. Why one is typically more destructive while the other is oftentimes more constructive, and it helped me a lot in my own thinking. So I asked her to come on the podcast today to talk about it more and hopefully help you figure out which one you’re feeling and which one you want to put to use.

First, can we talk about being offended? What’s happening when people are offended, and how can we understand it better?

Being offended means that we are insulted or we are upset or maybe even a little resentful because something’s happened. There is a spectrum of feeling offended. Of course we can feel, you know, mildly offended because someone stepped on our toe. Or insulted our designer purse. Or whatever. We can be, you know, more deeply personally offended, like when somebody has judged us for being wrong, or someone has felt disappointed by our actions. But there’s kind of two categories of feeling offended that I think are really relevant. Kate, that’s being personally offended and being morally offended.

So what’s the difference between personal offense, and moral offense?

Let’s just say it straight up. I think it’s really good to be morally offended. I mean, obviously, you know, we don’t like to see senseless murder and killings and violence, but given that they’re in the world, I would much rather be a human who is offended by that. You know? Does that make sense?

Definitely. Yeah. I mean that we have a sense of what’s right and wrong. It sounds like morally offended is kind of like this idea of like, this should not happen. This is something that we need to rally against.

Right. That’s exactly, exactly right. To be morally offended is to be affronted and to be not okay with the state of something large that that’s outside of ourselves. So racism certainly falls under that, you know. And other topics that are beyond our, our individual worlds. Personal offense on the other hand is a feeling of like…well, the word is personal. That somehow we are lacking, that somehow we’ve done something wrong. So the scale of offense is the micro, the intimate, the close to ourselves. We have like a little bubble around ourselves that can be personally offended, whereas a moral offense occurs in this broad scale on the scale of humanity.

Okay. And you’ve talked about, you started to talk about this a little bit, but how can we tell which one we’re feeling when we’re in that moment of feeling like something has been done wrong to us or in front of us? How do we know which one we’re at?

I think that it has to do with caring about something beyond ourselves. If what we’re offended about isn’t to do with us as an individual, that’s when we know it’s a moral offense. When we’re offended by something and it has to do with like the color of my hair or, you know, how I walk or, you know, something that’s mine that in my behavior or thoughts I can change or not change. That’s the world of the personal. Anything beyond that then becomes community level national, like a country level, um, global of the level of the planet. Maybe that makes it clearer.

This isn’t something that we necessarily talked about talking about beforehand, but I’m wondering, can you be feeling them both at the same time?

Yes, absolutely. It’s such a good point. You definitely, almost certainly, are feeling both of these at the same time. And the point about it is of course, which is useful. Right? What you always say is like, how do I put this to use? So, you know, when we’re morally offended, this is when we start to be activated and inspired. We may be ignited to take a larger scale action. Like go to your first protest or choose teachers you should learn from. Get uncomfortable and stay uncomfortable about the issues. And I think that that’s, what’s so great about moral offense or moral outrage is that it’s like nutrition. It’s like a vitamin pill for action beyond our comfort zone.

I mean, I totally agree. And it is easy to say though, sometimes can be harder to do. And I’m curious, do you have a favorite trick or any kind of an action item we can take when we notice that we’re feeling that personal offense and just feeling really stuck in it and we’re ready to move past it, but maybe we don’t know how?

I love that question. I like to really recommend that people feel that personal offended fully inside something like a journal.

Yes, not in a tweet. In the Twitterverse expressing our emotions of any kind is not a good thing. As, as I know, you know, so, well, Kate, feeling offended is the same thing. So this is about putting that feeling of personal offense into a good space for it. Certainly we don’t want within the conversations about racism to go into black and brown people’s spaces and be personally offended. That’s really not a thing that you want to do.

Right. So, personal offense, it’s not that like we should banish it to some Island somewhere away, far away and pretend we don’t have it. We’re going to be personally offended. We just need to have active processes. Like questions, like, okay, why am I feeling so personally offended? Where am I at with it? How would I rank myself on a scale of one to 10, 10 being super duper mortally personally offended or less? And how can we actually continue to ask ourselves reflective questions so that we come to understand why we’re personally offended and then bit by bit detoxify that?

I love that, it’s like emotional hygiene. Is there anything else you would like us to know about personal offense, moral offense?

Yeah. I just think that we, we really need everybody right Kate? I know you, you have said this too before is we really need everybody to play their part in making the world a better place and being a better human. Um, so like work through it, stay with it, be uncomfortable with it. And actually on the other side of being personally offended, I find that I have a lot of conviction, a lot of quiet certitude about what I can contribute. So I consider working through it to be that vitamin B boost like you said

Andrea, where can folks connect with you to learn more?

I am writing a lot of new things. Um, and so I would love any input or ideas about things that you’d like to see me write about Andreajlee.com is the website. And I’m such a fan. Kate, I hope that you will keep going with these conversations are super helpful.

I love Andrea’s reminder that tending to your emotional hygiene is an important part of getting to the root of what you’re taking offense to, so that you can really see it for what it is and be able to use it to go and do something about the things that morally offend you.

Which leads me to today’s tiny assignment, which is to think about something recently that has offended you. Maybe it was something somebody said to you, about you, or maybe it was something someone posted on social media, or that you saw written on a protest sign. And just sit with the feelings that it stirred up in you. Try to discern if it’s personal offense, or moral offense. And then remind yourself of Andrea’s mantra for these times: be very offended, then get over it.

And if you’ve acted on your personal offense, and perhaps said or done something either in public (or on social media) or directly to a black or brown person, it’s completely OK, and in fact, the honorable thing, to admit you messed up–something I talked about in yesterday’s episode.