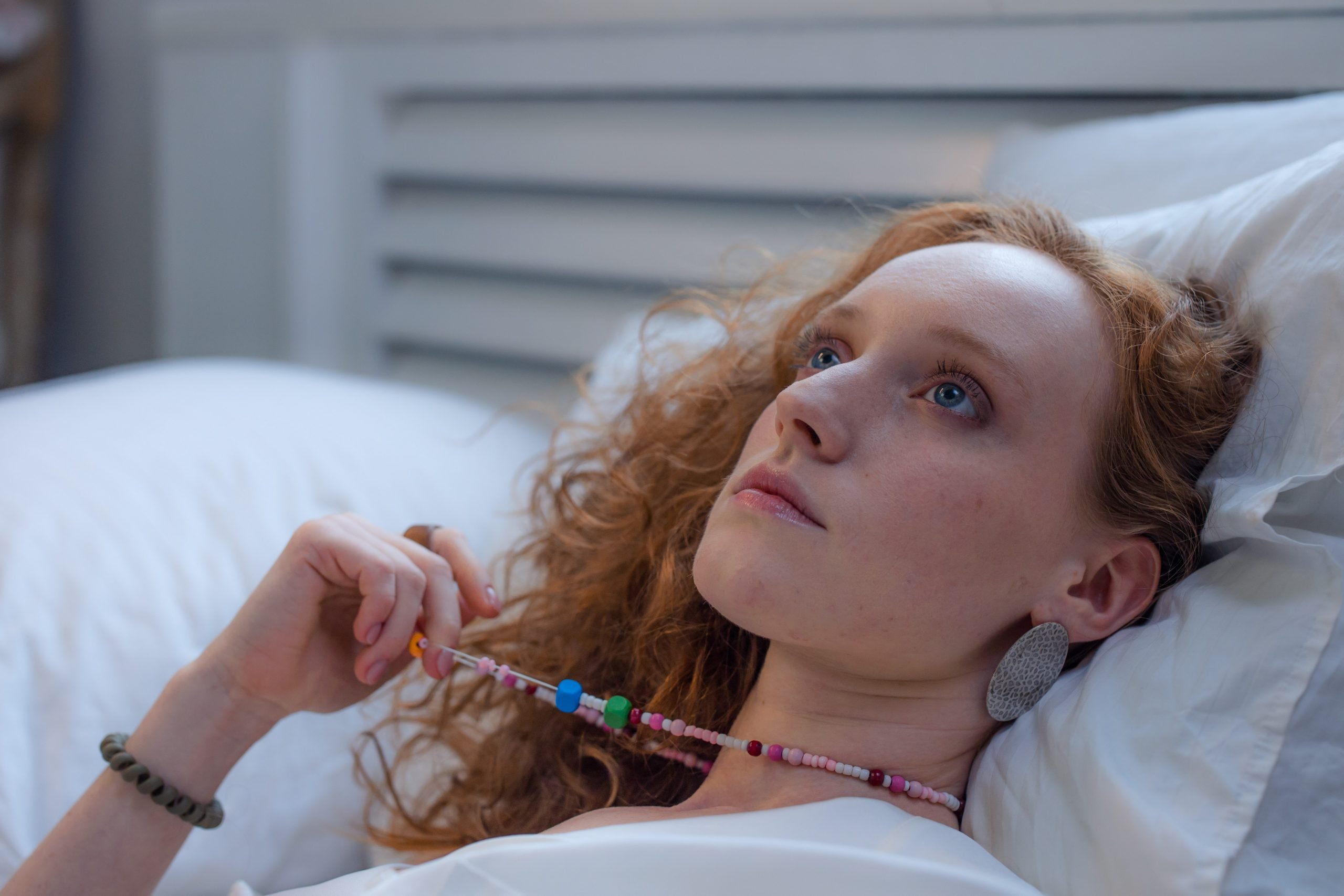 Today’s big idea is that because you are listening to a podcast called how to be a better person, you give a shit about a lot of things, including making good choices. And that desire, while beautiful, can also be a slippery slope into overthinking. I mean, we’ve all been there, right?

That’s why I’m excited to be interviewing Melody Wilding, a licensed social worker, executive coach, and author of the book, Trust Yourself: Stop Overthinking and Channel your Emotions for Success at Work. Melody specializes in helping people who care so much that they can make things harder by overthinking and overworking. I’m looking forward to getting her perspective on how to quiet an overthinking mind so that you can do more good while taking less of a toll.

Hi Melody. Thanks so much for being here today. You have a really lovely term for people who do what I call giving a shit. What is the term that you use and, how does someone know if it applies to them?

Yes, I call these people sensitive strivers. So they are people who are highly sensitive. They think, and feel everything more deeply. They’re more attuned to nuances and perceptive of what’s going on around them. But they’re also very ambitious. They’re strivers. They want to make an impact. They want to hit big goals. And so those two qualities can be a tremendous asset. It makes you very conscientious, loyal, you’re hardworking, but when some of those qualities are unbalanced, it can lead to downsides.

About 15 to 20% of people are highly sensitive. So this is not something that makes you weak or inadequate. This is a very real biological and neurological trait difference that a amount of the population has. So when it comes to decision-making, the brains of sensitive strivers actually process information more deeply. They have different brain circuitry neurochemicals in areas of the brain that are related to mental processing.

So when it comes to a decision, a sensitive striver is looking at every possible contingency, eventuality, gap, opportunity that can possibly happen and trying to weigh those all at once, all at the same time. And so all of that, that depth of processing, looking at various angles and nuances can leave you more susceptible to the stress that comes along with decision-making.

Right? So it’s an invitation for overthinking?

Absolutely. Sensitive drivers tend to be textbook over-thinkers. Especially when it comes to assuming the worst that could happen in this situation.

You have some memorable advice about how to put any decision into perspective. Can you share what that is?

One of my favorite tools for more effective decision-making is something I call the ten, ten, ten rule. And this is because, like I said, sensitive strivers, we tend to go to the worst case scenario. We worry about being a failure or that something is going to ruin our reputation, for example. So the 10, 10, 10 rule is very simple. It’s a way to put decisions in perspective, by asking yourself, will this matter 10 weeks, 10 months, or 10 years from now?

And doing that, asking yourself that question can almost immediately allow you to realize actually what I’m so hooked on in this moment is not even going to make a difference in 10 days, let alone 10 weeks or 10 months from now.

I love that. That’s so practical and it’s such a good way to get perspective on something that feels maybe so important in the moment, but might be something that we won’t even remember later. That’s super helpful.

Earlier this week, I talked about using intuition to make decisions on the podcast. And I talked about doing that by quieting the nervous system so that you can hear that wise inner voice. You’ve written about another way to build up the lines of communication between your rational mind and your intuitive mind, AKA your gut. Can you tell us?

Yeah, so your intuition,  I think we dismiss it as something that’s woo-woo or something that’s overly spiritual and not real. Your intuition is very real. It’s the accumulation of all of your knowledge or past experience that you make sort of a quick decision on without conscious thinking. So intuition is really powerful, like you said, as long as we create space for it and give ourselves permission to trust it and listen to it.

So one exercise that actually one of my clients came up with this, is the day of disinhibition. For one day he allowed himself to trust his gut on everything he was presented with. This particular person actually owned a business. And so a lot of trusting his gut came down to giving feedback to people instead of holding it back or trying to massage his words a certain way so it would land with someone in the best way.

It involved allowing him to set his morning up in the way he wanted to, instead of feeling like he had to be at his desk and doing certain things at a certain time. So that little experiment, that day of disinhibition was so freeing for him. You know, he told me, “Yes, I got a lot more done and that was fantastic. I got more done and I got it done more quickly. But what was the best part about it was the frame of mind it put me in.” That he felt freer lighter. He didn’t feel like he was getting in his own way.

I love that. So these days now that COVID has added a whole new layer to our regular decision-making process and forced us to make a lot more choices, we’re all prone to decision fatigue. How can we reduce the number of decisions we need to make in a day so that we have more bandwidth for those meatier decisions?

So decision fatigue is just what it sounds like. The fact that we all make hundreds, if not thousands of decisions every day. And most of those are minor and inconsequential. It’s deciding when to get up, what do you eat for breakfast. What order you do your morning routine in. But each of those decisions depletes the mental energy, literally the glucose we have in our brain for bigger decisions.

So the more you can eliminate some of those minor decisions, literally the more energy you have leftover for the ones that really matter. So one of the easiest and most powerful ways to limit decision fatigue is with routines and rituals. Routines, where you set something up to do a certain way so that you can do it almost on autopilot without thinking about the steps that are involved. Or rituals, where you have a certain process for doing something.

So you can also look at, where can I eliminate decisions all together? Personally, I am very boring. I eat pretty much the same thing every day. Because for me, so much energy goes into deciding what to eat and when to get groceries and how I need to meal prep. So I just eliminate all those decisions by eating pretty much the same thing from day to day. And that is a tremendous time saver and energy saver for me. Now that might not work for you. But I would encourage you to think about where can you create processes, standardized protocols? Where can you delegate or remove yourself from having to make a decision altogether?

I can also see that having sort of a uniform or just wearing the same type of clothes without having to put a lot of thought into it. I mean, of course we all are going to have our places where we want to make decisions because they’re fun. But then there are certain things that we don’t care about as much.

Like, for example, you love eating the same thing every day. Some people might really get into dressing up every day. But for me, I’m all about like the stretchy pants and a handful of shirts. So I really never really thought about the fact that I was a lightening my cognitive load. I love it.

So we’ve been talking about how being sensitive can come with a tendency to overthink and sometimes to overwork. But you also refer to it as a superpower. Can you talk about the strengths that come from being sensitive?

Yes. Like I said, sensitivity can be a double-edged sword. But at the end of the day, it is a tremendous superpower, if you know how to leverage it correctly and you have the tools to manage yourself. So your sensitivity, it makes you emotionally intelligent, empathetic. You know, many of the people I work with come to me and say, you know, I’m really not good at navigating workplace politics or influencing people. And I have to challenge them on that. Because as someone who is more sensitive, you have an ability to read people. To understand what they’re feeling. Also, that you can actually influence, understand them more effectively.

So sensitive people also tend to be more deliberate decision makers. They are people who tend to be a calming force on everyone around them. Even if maybe most of the time, they don’t feel that way within. But your sensitivity allows you to see nuanced opportunities, as I mentioned earlier, because you’re synthesizing information that other people are missing. So you’re able to see things that other people don’t and all of that is a tremendous advantage, especially in today’s world.

I love that. Is there anything else you wish more people knew about resisting the temptation to overthink?

I think one other thing I’ll add is what I call the sensitive strivers rule. Which is that, overthinking expands the time that you allow it. And I see this all the time. That if my clients don’t put reins on how long they allow themselves to think about something, they will overthink it forever.

So get creative about where you can apply healthy constraints to limit yourself from overthinking. Maybe you only give yourself a few days to do a presentation rather than maybe typically you’d give yourself two weeks and it takes the full two weeks. You can limit the amount of resources or people you consult to make a decision. Because I know for me personally, I have a tendency when I have to make a decision, I will consult everyone around me and I want everyone’s opinion. But then that can drown out my own intuition and my own voice. So making a conscious decision of I’m going to run this by one person I trust and then make a decision after that. Those constraints can really help you make more effective decisions faster.

Excellent. For folks who’d like to read more of your work or connect with you, where can they find you?

You can find the book anywhere books are sold, Amazon, Barnes and Noble. And you can find me at my website, melodywilding.com.

Answering those three questions should really help put things in perspective and take away some of the what ifs and give you some perspective and some competent about what decision you can make now that’s going to lead to the future that you want. I hope that you will come back again tomorrow when we are talking about how to make decisions quickly.