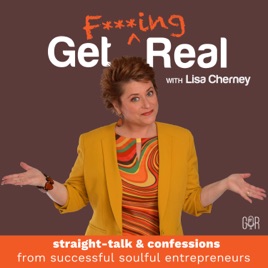 Today I am talking to someone who is a total expert at doing good in the world by living unapologetically as yourself. Lisa Cherney, also known as the Queen of Clarity, has been mentoring entrepreneurs for over 20 years. In 2014, after 15 years in business Lisa Cherney got f’n real and dismantled her successful seven-figure business, which taught her that just because something is successful and people like it, doesn’t mean you have to keep doing it. I think you can see why I thought she’d be so good to speak to the subject of getting over the fear of being selfish and over-pleasing!

So, you have a podcast and a business called Get F-ing real (I’m not using the actual word because I hear from many listeners who listen with their kids, so want to be respectful of that). What do you mean when by “get real”?

I was inspired to help people be more honest with themselves and then with others. And I knew I needed to help people get real. But it wasn’t strong enough, urgent enough. So that’s why I added the, the subtle F in the middle. And it really is about living an authentic life. Except what does that even really mean? So I decided to put some meat on those bones.

You know, it’s something that we kind of say to each other as sort of a sassy comeback. Like, Oh, get real. But there’s just a lot more meat to it there. And when I was serving my listeners and many of them listed trying to make other people happy as something they’ve done to try to be better people, but that didn’t work. I wanted to know. I mean, I think this is really tied into getting real. Why does trying to please other people backfire?

Well, in my experience of 21 years, working with mostly business owners. I call them mission driven entrepreneurs, because there’s usually a passion or a purpose behind what they do. And my experience, is they default to putting other people first, like a hundred percent of the time, that’s just their mode of operation.

I find that over time they lose themselves. It’s like, they don’t even know what do I even like, or how would I even want to do it? And so it’s especially detrimental when you override what you want or what would make you happy and put other people first all the time. And boy, does that send a message to yourself that you’re not important. So that really creates a pattern that is, can be really destructive.

Yeah. Well, how common would you say it is? Is that like a recurring theme that you see?

I think that it is very common. I think it’s more uncommon to be like me and people kind of look at me like I’m in a museum sometimes. Like you just tell them that, or you just, you just be that, or, you know, because there’s, so I feel like it’s, it’s a multifaceted challenge that has roots in so many different areas from like getting in trouble for being you, when you were a kid to being embarrassed and judging of who you are to worrying about people’s reaction to wanting to avoid conflict. Like there’s, it’s, there’s just so many layers that all result in people.

What do you say to someone who feels afraid to be perceived as selfish?

The first thing that I do is I ask them to really do like an inventory of all the things they’re tolerating. So I actually have these 12 GFR commandments that were collected over my 21 years of coaching these mission-driven folks and seeing how they’re getting in their own way and like, what is standing in the way of them getting out there and doing the work they want to do. And so the first one, they’re not really in any order, but the first one happens to be don’t compromise. Each commandment has a question that sort of helps you inquire. And the first one is that goes with don’t compromise is what am I tolerating?

And I really love people and encourage everyone to do a little just inventory. You don’t even need to commit to changing anything. But Just doing this inventory of all the different things in your life that you’re like, yeah, I tolerate that messy garage. I tolerate my kid kind of having an attitude with me. I tolerate not having intimacy with my husband. And I tolerate a job when I really want to open up my own business. Like it it’s so important just to be real.

And even if change a thing, but we just like, okay, you know, I realized this is not working for me, but this is where I’m, this is where I’m willing to be right now. But then the secret
is that people do wind up making changes.

I always say that awareness is the first step. Like you just can’t change something that you don’t realize is going on. Absolutely. And I also love that. I mean, it’s, this is kind of splitting hairs a little bit, but I love that you phrase it as what are you tolerating? Because, you know, I think I come at things as, uh, you know, I talked to people who want to be better people and being tolerant is something that we often associate with being like a favorable quality. And, and, and it is, we want to be tolerant of all different kinds of peoples and approaches and points of view and cultures and whatnot. But at the same time, everything has a flip side, right? So there can be things that we are being tolerant toward that maybe doesn’t deserve our, our grace.

When I was preparing for this interview and you asked me about being selfish, one of the things that came to me is I think the people that are worried about being selfish, don’t have to worry about it because the people that are really selfish, they’re not actually worrying about it. You can for sure say you’re probably not because you know, those selfish people out there, they never worry about that.

How do you advise someone who is cognizant of the fact that they’ve been spending too much energy on making other people happy to do things differently? Let’s talk practical steps.

So the first one would be to take an inventory. And two of my commandments are conducive to this. Number one, don’t compromise in that confession question of what am I tolerating? And here’s the other one. I think you’re going to like this one, Kate it’s number 12. And it says, find where you are holding yourself back and do whatever it takes to get out of your own way.

And the confession question, which is another way to do an inventory is where am I holding myself back? This is my stealthy, not so stealthy way of having somebody explore where they’re spending too much energy on other people’s happiness at the detriment of their own.  So if they could say, what am I tolerating? And they could say, where am I holding myself back? It will, illuminate how they are. Oh, I’m tolerating this partnership that I’m in when really I need to be flying solo. I’m tolerating how they’re treating me.

It helps people unpack all the different layers. And so that is for sure, the first practical step that I give people is just do it just for your own self, confess to yourself. You know, my podcast, my GFR podcast, the tagline is straight talk and confessions from successful soulful entrepreneurs. And the confession is so potent.

And I grew up as Jewish. So it’s kind of funny that I talk about confessions, but to me, it is the idea of telling our secrets and, you know, 12 step program has a slogan, “we’re as sick as our secrets.” And I always really took that one to heart think it’s true.

Anything else you’d like folks to know about how to get more comfortable with, as you put it, living unapologetically?

Well, I would say two things. One is that in order to hear our own desires and to even be willing to take inventory, like we’re talking about, we need to slow down. It’s like it’s in my, slowing down in my business, in my life creating space. I am an avid meditator, which I took on in that year that I was building that seven figure business.  And I was like completely imploding. I started to meditate.

I think we need to slow down in order to hear own desires. So if you are hearing this episode and you’re feeling like, okay, I need to have some tough conversations or I need, you know, I need to get real, but it feels scary. It’s like if we can resist the urge to just get busy and fill it in with whatever, you know, keeps us from being present to our feelings, that is such a powerful thing to do now, more than ever. Slow down to hear our own desires.

And then the second thing would be baby steps. I just always loved the idea of a baby step. It’s like, what is the smallest teeniest, tiniest little thing that you can do that you feel like you can do? And so just figuring out what the teeniest tiniest baby step is to make a change in the direction you want. Even if it’s like, you know what, from now on, when my husband says he wants Chinese food, I’m going to tell him I don’t like Chinese food. You know, whatever that smallest way that we could assert ourselves or make a change is at least a step in the right direction.

And how can folks who want more find you?

My main website is GFR.life. And if you want the commandments, just add a forward slash and the number 12 and the letter C to get those 12 GFR commandments. And then you can check out my show, the GFR podcast and all the fun podcast places.

Today, for your daily tiny assignment, and Lisa really spelled this out for us at the end, when I asked her for those practical steps. She said, you really need to slow down so that you can hear what you want, what you like. And just really get out of default mode, which I think people pleasing can become for a lot of people at different points in our lives. Maybe even all people.

And then to take a baby step. Her example was to tell your husband that you confess that you really don’t like Chinese food. Maybe there’s a teeny tiny confession you could make in the next 24 hours about something that you would normally refrain from sharing, because you didn’t want to make somebody else upset. Like you don’t like that Netflix show that you’ve been watching with your husband or you don’t like Chinese food, or I don’t know. I bet you know. I bet you have an idea of something that you’ve been tolerating as Lisa says.

So make a teeny tiny confession and always, always take this as yet another reminder that not only is it okay to slow down, but it’s necessary and you deserve it.