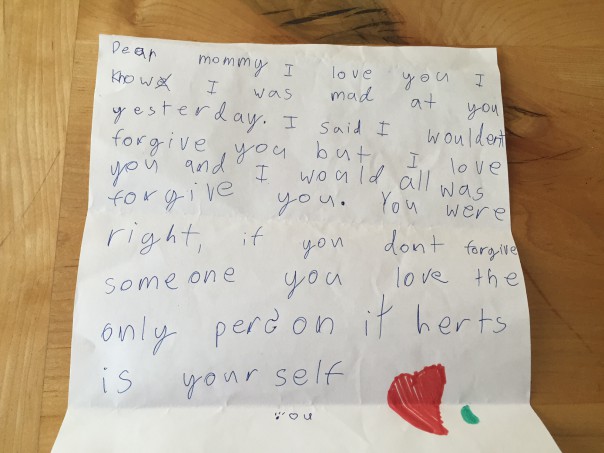 The other night my daughter and I had a fight.

It was a nice night. The kids were feeling better and were punchy and wrestling on the couch. So I shooed them outside. Or, I tried to shoo them outside. Probably because I was feeling like a really needed 10 minutes of separation from them, and because I wasn’t willing to be the one who removed myself, they were like, “Mommy! We don’t want to go outside! It’s dark! There’s nothing to do!”

I was having none of it. So I brought out the big guns. “Go outside for 10 minutes and then you can eat one of the cookies Lillian made today.”

Teddy grudgingly went outside, but Lillian refused. She crossed her arms over her chest and gave me the stink eye. I asked/told her a couple more times to outside. She stood her ground. So I lowered the boom: I said no cookie for you.

Hey, I’m not proud of using sweets to elicit behaviors! But did I mention it had been four days of full-time caretaking (while also working, or, as Tim Gunn says, making it work)?

She was not psyched. Lots of I hate yous, I’ll never forgive yous, you’re the worst Mommys. The whole arsenal.

Luckily, we own and have read the book Zen Shorts, by Jon J Muth many times, which contains this story:

Two traveling monks reached a town where there was a young woman waiting to step out of her sedan chair. The rains had made deep puddles and she couldn’t step across without spoiling her silken robes. She stood there, looking very cross and impatient. She was scolding her attendants. They had nowhere to place the packages they held for her, so they couldn’t help her across the puddle.

The younger monk noticed the woman, said nothing, and walked by. The older monk quickly picked her up and put her on his back, transported her across the water, and put her down on the other side. She didn’t thank the older monk; she just shoved him out of the way and departed.

As they continued on their way, the young monk was brooding and preoccupied. After several hours, unable to hold his silence, he spoke out. “That woman back there was very selfish and rude, but you picked her up on your back and carried her! Then, she didn’t even thank you!”

“I set the woman down hours ago,” the older monk replied. “Why are you still carrying her?”

Man, stories are great for teaching ‘important lessons’. And this is a biggie: One way we all get in our own way is that we hold on to stuff.

I’m not about to get all Marie Kondo on you (although, trust me, I LOVE clearing clutter)—the ‘stuff’ I’m talking about is intangible. Things like, grudges, hurt feelings, narratives.

I mean, I get it. It can feel so righteous to feel like you’ve been wronged. So righteous that it feels good. Maybe even cleansing. It’s human nature and even if you’re no longer eight years old, it can be kind of exhilarating to own your anger.

But it takes energy to hold on to how you’ve been wronged. It also takes up space that keeps new things at bay. And feeling wronged weaves a story that casts you in the role of victim, which is profoundly disempowering.

After I asked that, my daughter was quiet. I heard her sneak downstairs while I went to snuggle with her little brother for a few minutes. And when she came up for her turn for cuddles, she handed me the letter in the photo above.

I know it won’t always be this tidy or this low-stakes as she gets older, but you can bet I’ll be holding on to this letter and reading it repeatedly, both when I want to hear these words from her, and when the person I need to be forgiving is myself. In other words, whenever I need to set something down that I’ve been carrying.

What’s one thing you can put down this week? And when you do, what kinds of things do you make space for? If you’ve been mad at someone, could you use the energy you would have spent on re-hashing that hurt on connecting with someone you enjoy?

If you’ve been hiding from your bank balance, can you spend 15 minutes on balancing your checkbook and then spend the overdraft fees that won’t have to pay on something fun?

As ever, I’d love to hear about the grudges or hurts you’ve either successfully set aside or would really like to be able to find a way to do it. Share in the comments below.

Here’s to lightening your load!