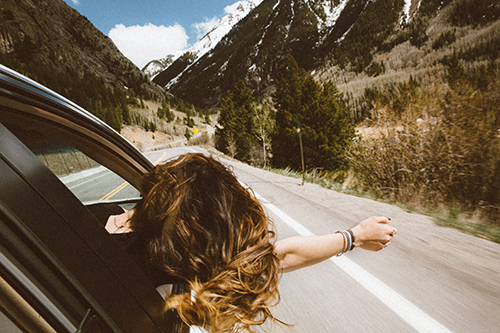 This is part five in six-part series on how to bust through any roadblocks you may have been unknowingly placing in your own path. Because we all do this! It’s not that you’re lame, or dumb. It’s that you’re human, and success is often just as scary—if not scarier—than failure.

OK, if you’ve been reading this far, you’ve stopped trying so hard, started noticing when you stop yourself, de-cluttered your psychic closet, and taken stock of your strengths.

Ultimately, any time you want to get a new result, you’ve got to give yourself a different experience.

That means you’ve got to do things you don’t normally do.

Which is not easy. You’ve gotten quite used to the way you’ve always done things. Even if it that way isn’t exactly producing comfortable results, it’s familiar. And your mind is great at equating familiarity with comfort.

Here’s an example. When my husband and I met, I weighed 138 pounds. A true mesomorph, that is about the skinniest I ever get when left to my own devices. During the 13 years since, I peaked at about 20 pounds over that weight (I honestly never let myself stand on the scale long enough to truly see what the number was)—and that’s when I wasn’t pregnant or immediately post-partum.

By last year, I had dropped 10 of those extra 20 pounds, but was pretty darn stuck at 148, despite significantly increasing my daily steps (thanks, FitBit), adding in regular strength training, and going gluten-free. I thought that was simply my new normal.

Then I got contracted to ghostwrite a book for a doctor espousing a particular diet (which I can’t tell you more about until the book is at least announced). As part of the deal, I needed to follow the diet. I signed a contract and basically was getting paid to change my food choices and MAN did I resist it! For a full six weeks, I pussy-footed around, eating one meal a day that fit the parameters.

I told myself that I needed to prepare mentally. But finally, I got scared that the doc would ask me how it was going and I would have to come clean. Gulp.

No, actually, it feels great.

It took me basically putting my integrity on the line, but whatever it takes is perfect—meaning, it doesn’t matter how much of a fuss you kick up about making a change, so long as you ultimately make it and get to reap the rewards. There will be something in that fuss that shows you how you’ve been stopping yourself, and helps you develop the exact muscles you’ll need to make that change a reality.

So there were some outward things I had to change—things like the foods in my pantry and the kinds of cookbooks I looked at—and some inward things I had to change—like realizing that I wanted to be a person who kept her word more than I didn’t want to be the weirdo who didn’t eat the pizza at pizza night. I also started talking to a health coach who specializes in this particular style of eating, and her guidance bolstered me and made the process feel a lot less overwhelming.

Here’s how to apply that to your own situation:

One of the most important things you can do to make new and exciting things a reality is to clean up your environment.

I’m talking physical things—the equivalent of getting the junk food out of the house—but I’m also talking about people and ideas.

What do you read and watch? I’m all for moments of mindlessness, but does watching Real Housewives uplift you? Or does it reinforce some belief, like rich people are jerks or in order to be successful you have to marry well, or something.

Really consider who you spend time with and what you expose yourself to, and start making new choices to be with people and in situations that light you up in some way.

As without, so within. Meaning, you’ve also got to start making new choices in your thinking.

If you normally try to figure things out on your own, ask someone you trust for their perspective. If you usually bite your tongue around your husband, try relating as much of your internal experience as you can muster

It almost doesn’t matter what you exactly do, so long as it is not what you would usually do.

Whatever new action you decide to take, it will give you feedback, which will help you decide what to do next.

But if you never make new choices, you’ll never give yourself a new experience. And you’ve read this far because you’re feeling stuck and are craving something new, right?

I know that those well-worn pathways in your brain can feel very difficult to bust out of. They are grooves that are so well-traveled that they’ve turned in to canyons. You do NOT need to automatically hop out of the canyon and start heading down an entirely new path. Even if all you can do is manage to get one fingertip out of that canyon, you’re on the right track. Keep going. One of these days, and it won’t be too long, you’ll find you’ve climbed all the way out. And then you’ll be able to decide which path you want to follow next. And that, my friends, is freedom!