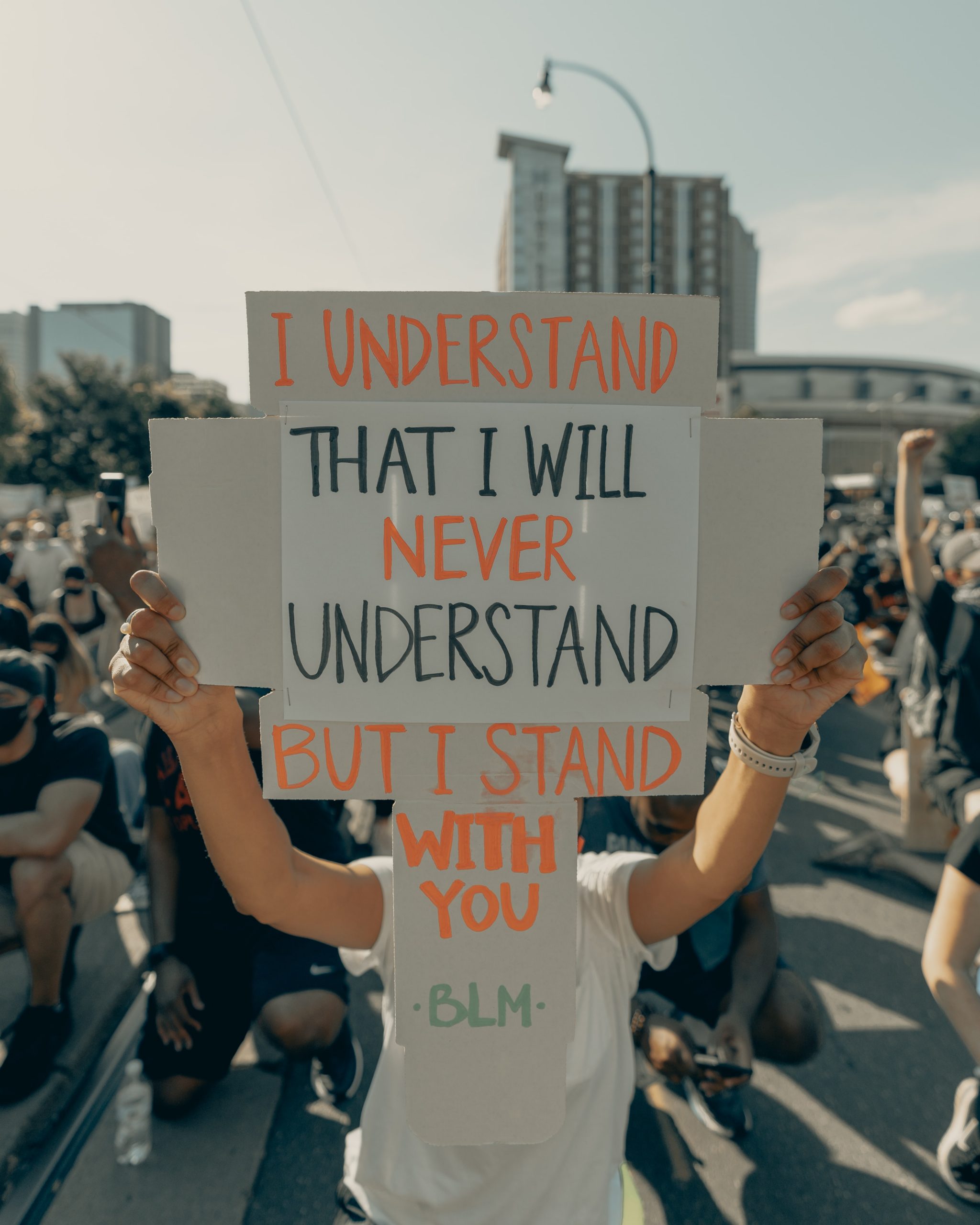 Each of us has to take responsibility to expand your education on racism about the issues we care about. When it comes to racism, frankly, white people are playing catch-up. We may know deep down that racism is wrong. That it hurts innocent people, and that we have to help make it stop.  But racism has a long history and a lot of nuances and manifestations. So many aspects of racism are just not in your conscious awareness if you are white. Because you haven’t directly experienced it. That means there’s a lot about the state of the world and racism’s place in it that white people are ignorant about.

Put On Your Racism-Detecting Sunglasses

It’s kind of like after Trump got elected. White people were crying at the bus stop the next day. I felt this way—I was shocked. I couldn’t believe that many people would vote for a president who was so clearly racist. From his awful remarks about Mexican people to his Muslim travel ban. And that doesn’t even include his comments about women. I just didn’t get it, and learning that 53% of white women voted for him blew my hair back. It felt devastating. Yet when I tuned in to the reactions of the black community, I could see that they were rightly rolling their eyes at my middle aged white lady upset. Saying, how could you not see what we experience every day?

There are so many things white people just haven’t seen.

It reminds me of this so horrible it was kind of great movie that I saw once on a Saturday afternoon long before the days of streaming video. It’s called They Live, and it starred Rowdy Roddy Piper. He plays a guy who discovers a box of sunglasses in a random attic that, when he puts them on, allows him to see that half of the people walking around the streets are actually robotic aliens in disguise. It’s kind of like white people are collectively putting on their racism-detecting sunglasses.

Expand Your Education on Racism

It’s a natural response to having your awareness raised to want to catch up on everything you missed. It’s honorable to want to know more about what’s been going on that you haven’t seen. Here’s what you can’t do, though —ask a person of color to fill you in to expand your education on racism.Because they have been swimming in it. They are exhausted by just living in it every day. It’s not their job to bring you up to speed. It’s yours.

Be A Better Person—Become An Ally

If you don’t educate yourself about a situation that needs to be remedied—no matter how urgent that problem is. You’re gonna come in with a full head of steam and not really be much help, kind of like a toddler who wants to ‘help’ make dinner. There’s gonna be mashed potatoes smeared all over the cabinets and some very exasperated grown ups.

Certainly, if you know a black author or expert who offers something you can pay for to learn from—a virtual class or coaching program, or a book, by all means, patronize them. But don’t ask them to do it for free.

This is all a long way of saying, when you commit to doing the inner work of anti-racism, expanding your education on racism is a necessity, AND it’s on you to get the education you need to be a better person and a helpful ally.

And the truth is, education takes effort. It’s definitely work, and sometimes it feels like hard work. I read the book White Fragility last year when I was reading a book a week. It’s not a very long book, I thought I’d breeze through it. It took me two and a half weeks to read because it was such a noodle baker, pointing out things that have been hiding in the crevices of my brain. I’d have to go back and re-read and then stop and put the book down as I remembered scenes from my life that all of a sudden I was seeing through a different lens, and it wasn’t pretty. So there was cognitive effort, but also emotional work to process the feelings of guilt or shame or embarrassment that came up.

But it’s also worthy work—work that will make you a better person and help you make the world better. As a white person, it’s your privilege that you can decide when to put the sunglasses on and take them off. People who aren’t white don’t have that option in America. Please, let’s put them on and keep them on—it’s the best way for what we see when they are on to change.

As an author and ghostwriter, I am clearly a lover of books, and there are so many great, just fantastic books out there to read. Here are just a few examples of how you can expand your education on racism:

How To Be an Anti-Racist by Ibram X. Kendi

Hood Feminism: Notes from the Women that The Movement Forgot by Mikki Kendall

So You Want to Talk About Race by Ijeoma Oluo,

Heck, read them all, they all help shine some light on a new aspect of racism and the path to dismantling it.

But maybe you’re not a reader. And even if you are, reading one book or even five books isn’t going to cut it to expand your education on racism. Your tiny assignment for today is to go and find three black journalists or thought leaders to follow on social media. You want to expose yourself to their points of view every day; repetition is an important part of learning anything new. On top of learning from them, you can help others in your circle learn from them by Amplifying their posts so that their message gets spread even farther.

I have some recommendations for you

Nikole Hannah-Jones, a Pulitzer Prize-winning reporter covering racial injustice for The New York Times Magazine and creator of The 1619 Project, which explores the history of black people in America since 1619, when the first Africans were brought here in chains.

Zerlina Maxwell, author of the book, The End of White Politics, that’s coming out in early July

Layla Saad, author of Me And White Supremacy is really active on Instagram

Michelle Silverthorn is a diversity educator who is @inwithmichelle on Instagram. And one of her recent posts said  “It is never, never too late to begin.” If you haven’t already, I hope you’ll begging your anti-racism education today.

This is an intense time on multiple levels. If you’d like a little handholding and direction on doing the things that help you stay grounded (and not freaking out), I’ve got a gift for you — I compiled all the tips I covered in my 21 Day Clam the Eff Down challenge that I ran here on the podcast starting in late April into a mini ebook that you can download FOR FREE