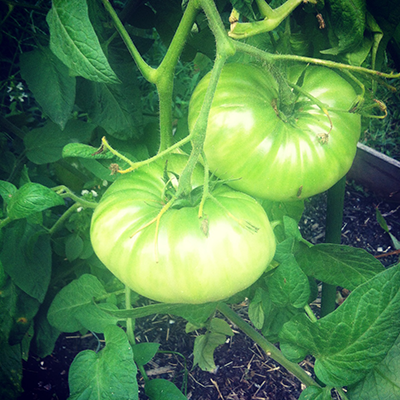 These suckers (and their many sisters and brothers) took over two months on the vine to ripen. Two months! And then they took another 3 weeks on the windowsill.

A few weeks in, and I was craving some freshly made salsa something fierce. I tried staring at the tomatoes, willing them to turn red before my very eyes. I tried ignoring them, and focusing on the veggies that were ready to go. I admit, I even tried hating those tomatoes at times. =)

Here’s what finally happened: I sauntered down to the farmer’s market and bought some luscious, juicy, heirloom tomatoes and whirred those puppies up into some righteous salsa.

My green tomato woes had been the result of my being attached to form – which is another way of saying I was convinced that my desire for fresh salsa had to come in very specific way. (I wrote more about that here.)

What do my slowpoke tomatoes have to do with you?

Let’s say you’ve got a burning desire for something that just isn’t happening on a desirable timetable. “Just wait,” “be patient,” “let it go,” you keep telling yourself. Except it’s not working – you’re compulsively checking for signs of movement. You’re holding off on making any other decisions until the thing you’re waiting for comes through. And you’re likely starting to feel a little sorry for yourself that the thing you want just doesn’t seem possible.

OK, stop. You may not be able to force the specific outcome you’re hoping for, but you can certainly go buy yourself some metaphorical tomatoes. =)

Make one decision – any decision – that’s in front of you at the moment and watch your commitment to moving forward begin rippling into other parts of your life – even that part of your life that’s making you crazy right now because there is no discernible movement.

Find a way to break the cycle of waiting, no matter how small. Even if it feels silly (kind of like buying tomatoes at the farmer’s market even though you’ve got a windowsill full of them at home). Do it with the intention of building momentum, and watch any bottlenecks start to dissolve all on their own.