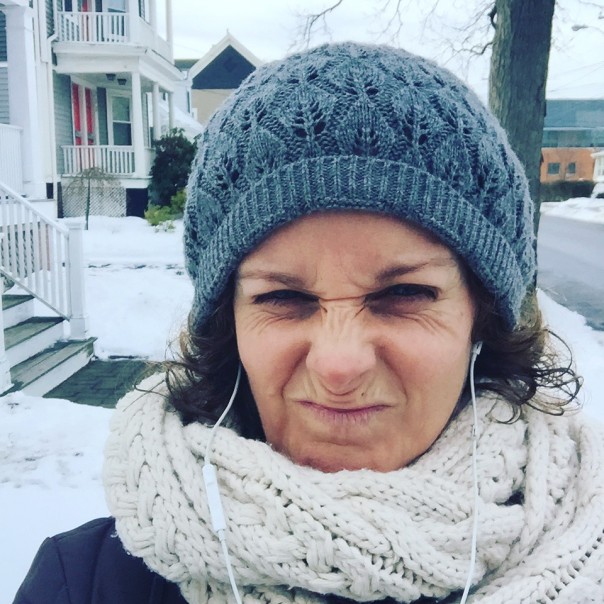 If we’re connected on Instagram (@MsMindbody)or Facebook (if we’re not, I’d love to be!), you saw this photo this week. It’s me, making my “Grrrr” face.

I was seriously irritated by something that I just couldn’t shake, despite doing all the things I know typically help me feel calm—I meditated, I talked to my husband, I wrote an angry letter (that I didn’t send, just to get it out of my head), I squeezed the stress ball my daughter made out of a balloon and some Playdough. But still, the aggravation was sticking to me like glitter.

I wanted to post a picture of myself all agitated because people have a perception that if they could just “get Zen,” they wouldn’t ever get upset about anything ever again.

And while it’s true that giving yourself regular opportunities to de-compress and to hear what you really think will in general make you less likely to have over-size reactions to things, you’re still human. You still have buttons. They will still get pressed. And that is actually a beautiful thing. Because emotions are messengers from the subconscious. They let you know when there’s something going on that needs your attention.

Most often, though, that something isn’t necessarily what you think it is.

I remember when I was doing my yoga teacher training, we also studied meditation with a high-level Shambhala meditation teacher. At that time in my life, I had just gone through an epic breakup, where my boyfriend, whom I thought I was going to marry, broke up with me because he’d fallen in love with his co-worker. Which, hey, love is funny like that. But I had just moved from New York City to New Jersey to live with him. Three weeks earlier. I was miffed, to say the least.

During those meditation sessions, I would sit on the cushion and feel my body temperature rise as my anger welled up. I felt so “un-Zen.” I felt like I must be doing something wrong. So I asked my teacher, “What do I do with all this anger?”

He told me, “There’s nothing to do. Just feel it and be curious. Because there is always something underneath anger, such as hurt or fear. And that’s what you need to be able to be present to for the anger to pass.”

Yeah. That. I was hurt that he’d chosen someone else, and afraid I’d be alone for the rest of my life. But it was easier to be pissed off than to admit that.

Ever since I’ve really let myself feel what I’m feeling. Emotions are like the stomach flu–you can’t talk yourself out of a need to vomit any more than you can talk yourself out of being angry. (This is kind of a gross metaphor—sorry about that!) But once you allow it to run its course, sure, you feel totally in the grips of something beyond your control for a bit, but it also subsides quickly. Pretty soon after, you’re back to your life feeling a lot lighter and like you survived something important.

Are you in the throes of some big, perhaps even scary emotion? Know this: There is something underneath all that swirling that is simple and true and that’s ready to be seen. On the most basic level, all you have to do is allow yourself to see it. But perhaps you have to get really stirred up and a little bit beaten down to get to the place where you will let it in. Whatever discomfort the emotion may be bringing, let it be in service of getting you to see what lies beneath. That’s when true healing happens.

P.S. The message I finally saw underneath my extreme irritation this week was that I was scared to step out and do something on my own. The person I was dealing with definitely patronizing and rude, and that certainly pushed my buttons. But I can see now that the reason I couldn’t let it go was because I was angry that she was going to “make me” go do something my ego didn’t want to do. And I thank her for helping me have that realization. I don’t want to be friends with her or anything, but I can see she did me a service.

One thought on “Emotions Carry Messages. Are You Receiving Them?”