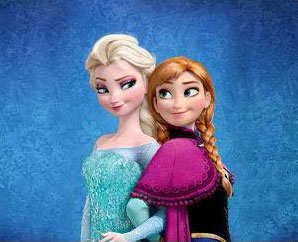 We are obsessed with the Disney movie Frozen in our household. Even me. Well, maybe not my husband, but I’m pretty sure he knows all the words to the soundtrack, as it’s on constant repeat in our car.

As an example, my 3 year-old-son, Teddy, the other day said, “Mommy, you and I were just meant to be.” My heart instantly puddled and I told him, “Aww Teddy, I think so too.” Two beats later, he said, “Mommy, what does ‘meant to be’ mean?” I had forgotten it’s a line from a Frozen song.

Which…how could I forget? Not only do I know all the words, but they pretty much never fail to bring a tear to my eye. Especially when Elsa sings “Let It Go.”

But first, let me offer a brief synopsis for those who haven’t seen the movie =).

Elsa is the elder daughter of a king and queen. She’s blonde, beautiful, and has also been cursed with the power to freeze things with icy beams that shoot from her hands. Anna is her spunky, plucky, red-headed younger sister.

The girls are best buds when they’re little, until Elsa accidentally knocks Anna in the head with some freezing rays while they’re playing, and Anna almost dies. From then on Elsa, goes in to hiding, wears gloves, and stays away from her best friend at all costs so she doesn’t hurt her again.

Fast forward a few years, when the parents die at sea, and Elsa is about to be crowned as queen. Anna meets a guy at the coronation and they instantly get engaged. Elsa’s so upset when hears the news that she totally loses control of her powers and sets of an eternal winter. She then runs off into the mountains and builds an ice castle, reveling in the fact that she is finally free of trying to hide her gifts for the sake of keeping others safe.

But it’s not the plot points that really choke me up, it’s the contrast in personalities of the two sisters. Anna is the optimist in the family. She’s open, engaging, trusting. Game for anything.

Anna believes anything can change, so long as you have love. She’s not daunted by a long journey, biting cold, or being on her own. She speaks her mind, is always herself, and makes friends everywhere she goes.

Elsa’s the one with the looks but also the responsibility. As eldest, she’s the one who will be queen. As the holder of mysterious and potentially dangerous freezy powers, she’s also the one who must keep a tight lid on who she really is.

Elsa is afraid if she lets her power flag fly, she’ll hurt the people she loves. She hides out in her room where she knows she’ll be ‘safe.’ She never reveals what she’s thinking. She’s miserable, but she’s convinced herself it’s the way it has to be.

As much as we’d all like to think we’re an Anna, I’m guessing Elsa is ringing more true.

So many of us keep ourselves hidden or small so that we don’t get too successful, happy, or rich. So that we don’t make the people around us feel bad about themselves.

I’ve definitely been there. And I have quite a lot to say on the subject. =)

You know deep down there’s a better, more joyful, more open way to live. But the thought of changing is just a little overwhelming. You want a Hollywood ending where transformation is fast, definitive, and permanent. And when that doesn’t happen within a couple weeks, or even days, of trying to do things differently, you go back into your safe zone and shut the door.

If this sounds like you, please join me for a no-cost teleclass this Friday, January 31:

4 Beliefs that Are Keeping You Stuck

Why have it on a Friday? Because it’s Chinese New Year. Let’s give ourselves a do-over on changing things up in 2014. Elsa had to give up some long-held beliefs to find her way to happiness, and you can do it to. It’s time to Let It Go!